Our Time on This Earth is Short

There can be joy in the dying process.  I remember my reaction when my father was diagnosed with terminal pancreatic cancer.  It was significantly different from the other times I had experienced the loss of a loved one.  In the past, I felt somewhat devastated and every fiber of my being screamed no, but this time was different.  Yes, I was sad about it, but interestingly, by some supernatural grace of God, I was thankful.  Thankful for the many years we had with my Father, thankful for the beautiful life he had led and thankful to be his daughter.  You see, I had already lost a parent who was much younger. 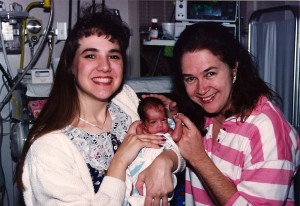 My Mother-in-Law with our first child

My mother-in-law died of Cancer in 1999 when she was only fifty three. Unlike my father’s six month battle, my mother-in-law died only a week after being diagnosed with breast cancer. I remember feeling robbed of our life with her, and even though she was my mother-in-law, we were very close.  My father was sixty nine when he died and while that may be young by today’s standards, it is significantly older than fifty three.  So my prayer was, “thank you God, at least we had him this long.”

When my family chose to pick up and move our seven children to a different city to be close to my parents during my father’s illness, we knew it would be difficult.  However, the benefits clearly outweighed the sacrifice.  By relocating to a home only fifteen minutes from my parents, we were able to spend many beautiful moments with my father.  The presence of our family not only allowed us to spend time with him and the rest of our family but he too could find moments of joy while enduring the suffering that comes along with cancer.  Yes, he was understandably sad about leaving all of us, but he clearly had lived a life in service to Christ and therefore had little to regret or wish for.  I remember when he shared his cute “bucket list” with me and said, but if I don’t get to do them that’s okay.  One of the items was to be able to go to breakfast with each of his grandchildren.

Being Generous with Your Time 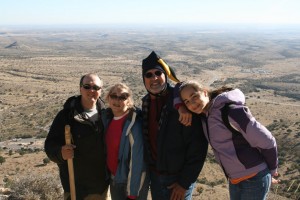 Hiking in the Mountains

Time was always a gift he had shared generously with his family.  I remember the many adventures he had with my children, wishing I could go along, but being stuck at home nursing or caring for the infant that I currently had.  Whenever I was able, I always wanted to tag along with him and the kids.  He always lived life to its fullest and wanted to “make memories”.  I am so thankful for all the memories he has given to my children.  We vacationed together often, went on bike rides and many various other adventures where the goal was simply having fun together.  The other thing that brings so much joy to my heart is the witness of Christ he gave to my children.  His dying wish was to make sure no one blamed God for his passing and that his friends and family always kept close to the faith.  We prayed together with my Dad many times for his healing, but were always open to the fact that this might not be the plan.

The Gift of Presence

Joy is felt when being present with one another.  Even though I knew my dad was dying I still enjoyed being around him.  He would still joke around throughout his suffering.  I stand in awe of the relationship my father must have had with Christ to be so peaceful in the face of death.  It is surely a supernatural grace to look forward to one’s life in heaven.  I remember telling my father, when he was getting close to death, to not worry, that it wouldn’t be long and to reassure him that the suffering would end soon, and to also get excited about what is to come.  I even told him, he got the “golden ticket” to leave a little early.  You see, our faith teaches us that death is not to be feared and no one can fathom the joy that awaits you in heaven (cf. 1 Cor. 2:9). 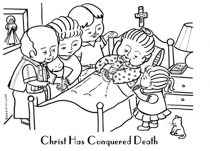 During my father’s last days, I remember sitting with him.  He had twenty four hour hospice care at this point,  but I still wanted him to have a loved one with him at all times.  I felt compelled to play songs of joy in anticipation of his journey to heaven.  I remember sitting there visiting with him on the last few days before he became noncommunicable.  The funny thing is, we weren’t really visiting about important things, just normal conversation.  I remember thinking maybe we should have been saying something more profound to each other, but like an old married couple, sometimes more can be said by being present without saying anything.  This is how I felt about my father.  I knew he loved me and he knew I loved him.

On my father’s last day on earth, I remember feeling a bit giddy.  Maybe it was the lack of sleep, but I was excited not only for his suffering to be over, but for his entrance into heaven which I knew he so deserved.  My father had done many things in his life in service to God including running a prayer group for the last ten years.  His funeral services were a testament to this great man and his profound impact on those whom he knew and loved.  No less that a thousand people came to pay there respects and not only did this bring joy to our family during the services, but the continued support of family and friends during the subsequent months also brought us joy in the midst of our grief.  Blessed are those who mourn for they will be comforted.  Thank you God for your continued mercy to fill us with your joy and peace even in the times of sorrow on this earth.

He will wipe away every tear from their eyes, and death shall be no more, neither shall there be mourning, nor crying, nor pain anymore, for the former things have passed away.”  – Revelation 21:4

Denae has been married to Allen for over 24 years and is mother to nine children. She is a middle school teacher by trade, but she chose to homeschool her children for the past 15 years. She has a Masters degree in Education Administration and was Vice President of the board for Holy Family Catholic School in Austin, TX.