My soul proclaims the greatness of the Lord,
my spirit rejoices in God my Savior
for he has looked with favor on his lowly servant.
From this day all generations will call me blessed:
the Almighty has done great things for me,
and holy is his Name.
He has mercy on those who fear him
in every generation.
He has shown the strength of his arm,
he has scattered the proud in their conceit.
He has cast down the mighty from their thrones,
and has lifted up the lowly.
He has filled the hungry with good things,
and the rich he has sent away empty.
He has come to the help of his servant Israel
for he has remembered his promise of mercy,
the promise he made to our fathers,
to Abraham and his children for ever.

Scripture Reading from Genesis 3:1-13 – The Serpent in the Garden and the First Sin by Adam and Eve

If we were Adam or Eve in the garden, do you think we would choose to obey God?  Sin is attractive and pleasurable; or we feel pressured by “friends” to do something that we know is wrong, and many times we do it anyway.

Responding to the Father’s Mercy

In the beginning God made Adam and Eve without sin. But Adam and Eve didn’t fully trust God, and so when the serpent tempted them, perhaps even threatened them, they chose to disobey God’s one command in the Garden of Eden.  They ate the fruit of the tree of knowledge which God had instructed them not to eat.

Why did God tell Adam and Eve not to eat the fruit of the tree of knowledge?  It may be because God wanted Adam and Eve to trust Him completely and learn good and evil from Him and Him alone.  When they ate the fruit, they could determine right and wrong for themselves and make up their own ideas of what was right and wrong apart from God.

The choice they made was between perfect Love (God) and their own desires.  Their own selfishness won.  God loves us so much, and He only wants what is best for us.  He wants us to love Him in return, but many times we choose to turn towards ourselves and do what “feels” best, not what God wants.

What does it mean to be selfish?  Being selfish is thinking of yourself first.  It is doing something that will make you happy and not worrying about how it may affect others.

Adam and Eve were God’s creation, and He knew what would make them happy.  His one command not to eat of the tree in the center of the garden was a command of love to protect them from evil, from selfishness.

Adam and Eve allowed themselves to be tempted.  They should have called out to God for protection from the serpent, but instead they listened to the serpent and chose to believe his lies.  The serpent, otherwise known as the devil, was the first liar.  He tells us what we want to hear, and tempts us to distrust and disobey God.  He makes sin look fun and enjoyable; it is only after we sin that we discover we were tricked.

In the bible, the Hebrew term for serpent is a bit different from the English word “snake.”  It means a fierce beast or a very scary monster.  So when Adam and Eve encountered the serpent in the garden, they may have been afraid of what the monster might do to them.

What would you do if you encountered a dangerous snake? Go to your parents, right?  What should Adam and Eve have done?

How can we know what God wants us to do?  We can read scripture, we can spend time in prayer, we can talk with people we know who are close to God.  Also, examine your conscience daily and receive the sacraments of Eucharist and Reconciliation often.

Father of mercy, through Adam’s sin mankind abandoned you. Yet, still you seek us, calling out, “Where are you?” Bring us back to you, Father, so that, enveloped by your mercy, we can worship you again as the one from whom all good things come, and adore you as our true Father. Through Jesus Christ our Lord. Amen. 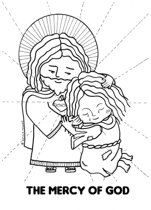